This template no longer appears to be in use 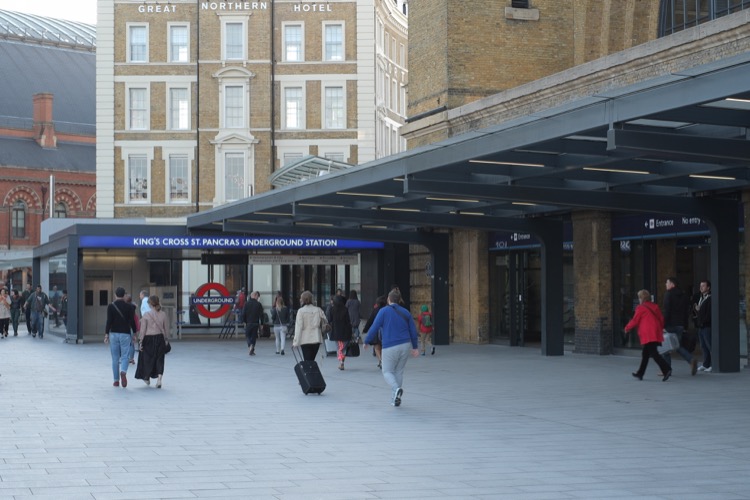 building. Detailed site inspections and sympathetic detailing of the existing buildings was required to preserve their character.

The new elements of the redevelopment were designed to produce a strong, simple character despite meeting onerous technical demands. 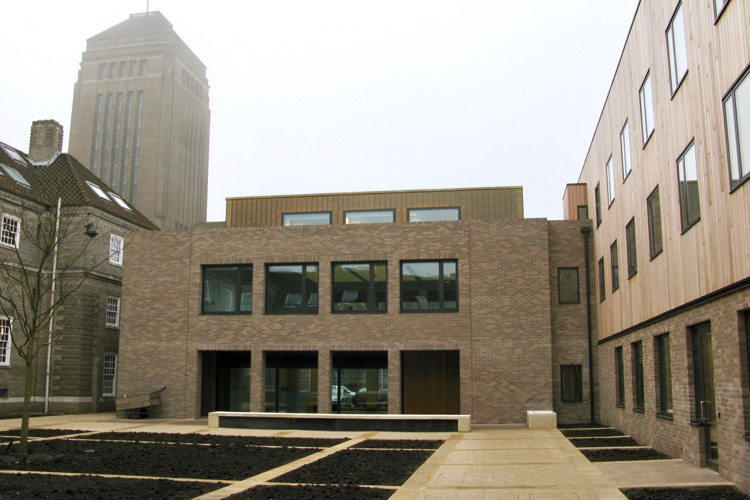 The new study centre and student rooms at Clare College, Cambridge is a contemporary addition to the college’s existing halls of residence.

The functions are differentiated by the cladding materials for the student rooms (cedar) and study centre (brick).

Although the new quad is private the openings in the study centre allow a clear view through at ground floor. An auditorium is located in the basement to reduce the massing of the building. 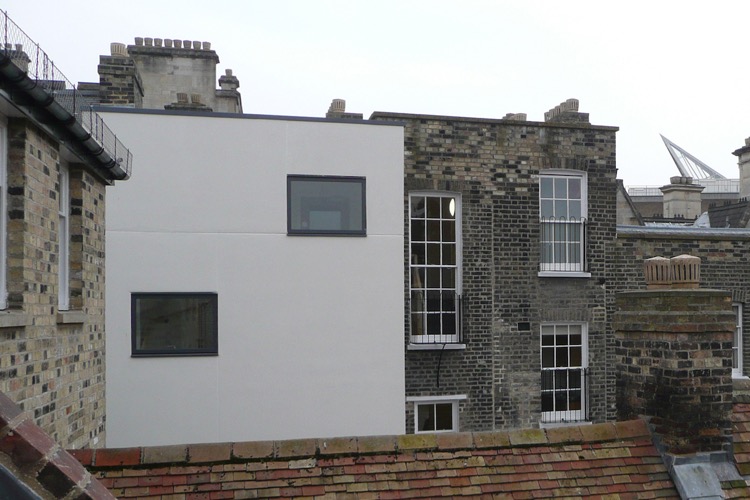 A variety of historical buildings comprise a town block in the centre of Cambridge used by St John’s College for student rooms with shops below.

The majority of the buildings are listed and required extensive survey work and traditional building methods for their refurbishment.

Most of the upgrade works (e.g. for fire and acoustic separation) were kept hidden and new terrace and stairway additions are only apparent from the internal courtyard. 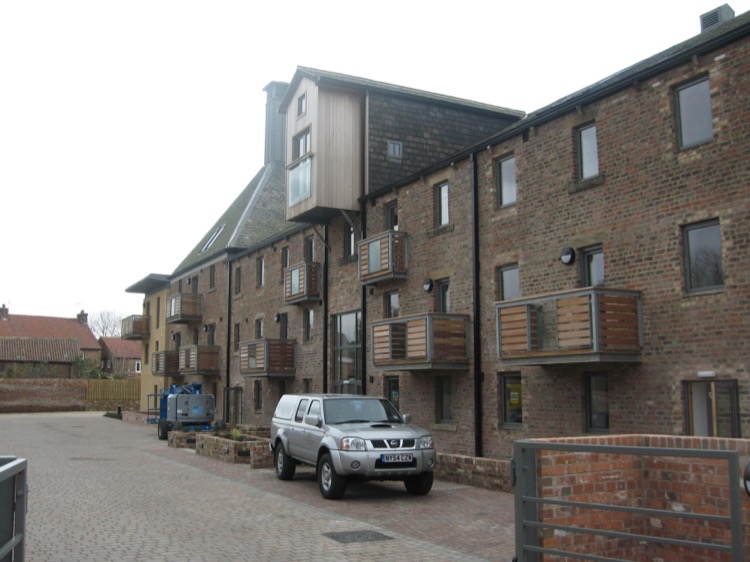 The maltings at Boroughbridge had been disused since the middle of the twentieth century however the building is grade II listed due to its historical importance.

The refurbishment involved creating new openings in order to provide habitable rooms, replacement of the floors and removal of the kiln The internal structure was retained, refurbished and left exposed where possible. 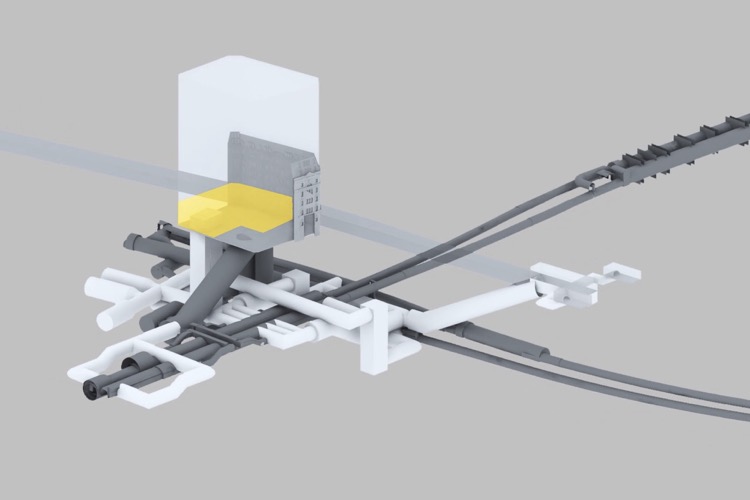 Detailed analyses of the proposals were made against factors such as passenger demand, constructibility and surface level impact. 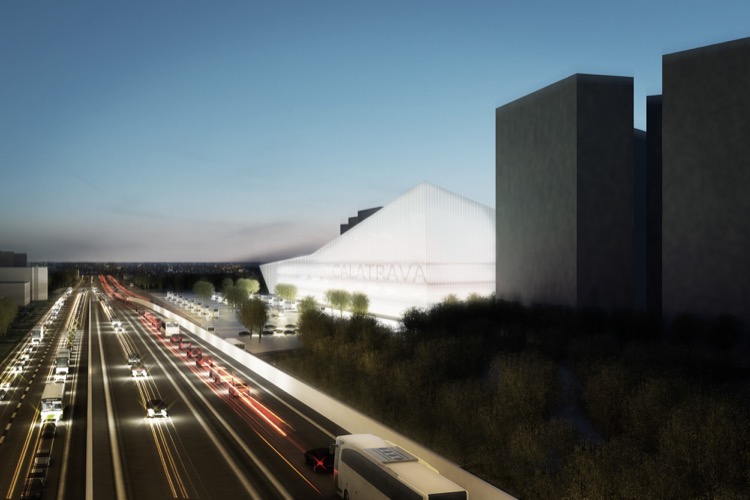 A series of concept designs was produced for a private developer illustrating commercial development associated with new transport hubs in Moscow.

The brief included detailed transport and townscape analysis in order to demonstrate the feasibility of the concept design to local officials. 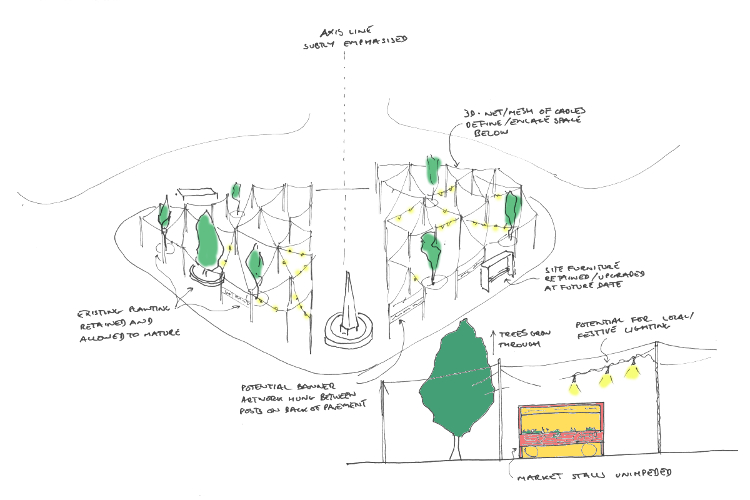 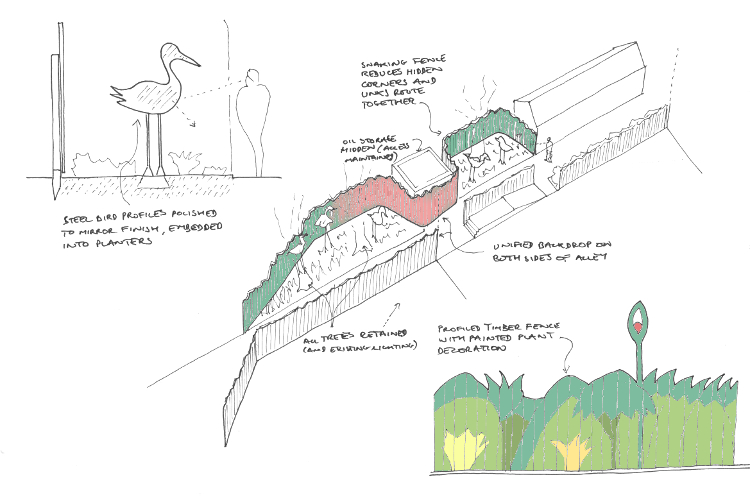 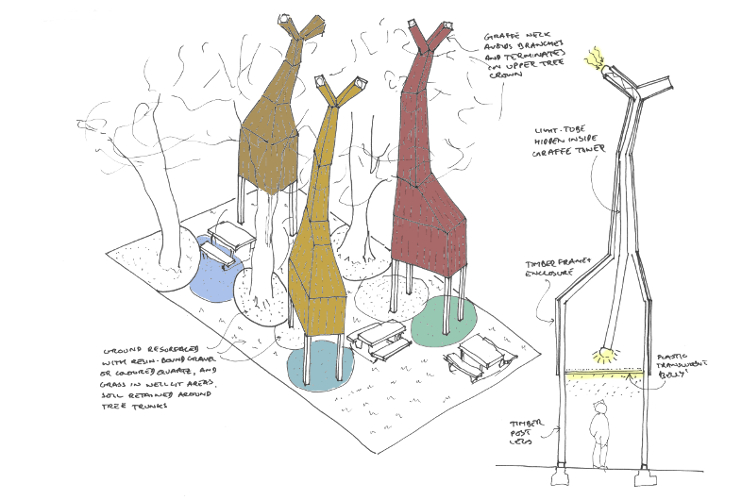 We proposed a small number of low-impact, medium-term interventions in an open call for ideas to improve public spaces around Waltham Forest.

Two of the proposals used animal forms and colour to enhance the quality of the space with the other two proposals defining an area for further activity and interventions.

The first of the ‘animal’ proposals was to create giraffe-like structures housing lighttubes to bring natural daylight into a picnic area shaded by trees. The second was to introduce a forest-walk backdrop to a neglected alleyway with mirrror-finish bird silhouettes mitigating blind corners and referencing the nearby wetlands.

The first ‘spatial definition’ proposal would have seen the installation of a network of cables above an open space on a busy junction. The cables would have provided an open lid to the space and allowed use of the space for market trading to be unimpeded.

The second ‘spatial definition’ proposal was for an external stage in a park for a theatre group with a ring section for small recitals and a disc section as the main stage. During normal hours the stage could be used as general park furniture. A nearby shed structure would have been used to store supports for backdrops and deckchair seating. 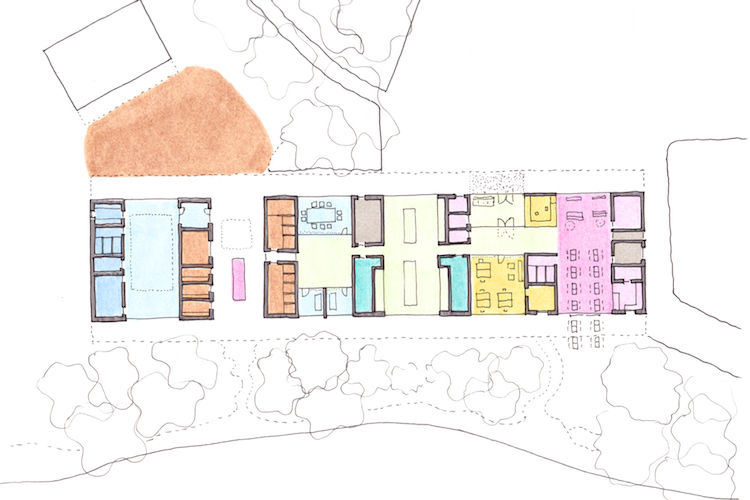 The site for this competition is within the wooded area of a wetland park. The existing centre required a significantly upscaled programme and additional landscaping/parking.

Our proposal was for a longhouse building drawing on vernacular form and divided into programmatic strips occupying the full width of the building, these strips alternated between open (public) and closed (support) areas producing an A-B…-A rhythm along the length of the building and providing views right through the building when close by.

Given the secluded nature of the site and its inherent focus on the landscape we chose a very low-key approach to the form and materials of the building with the intention that it would visually recede into the woodland and complement retained buildings near by.

Our competition winning proposal took the position that demand for smaller physical retail spaces will increase and that these spaces will primarily be used as a forum for brand engagement and other value added activities. Brand engagement will form an ongoing part of consumers’ life with apps that enrich their use of products (e.g. fitness apps that also offer dietary information and access to group events).

The retail environment will support these demands by including a broader range of secondary activities and events spaces as well as incorporating augmented reality technologies to tailor the retail experience to consumers’ lifestyle preferences. An increased focus on the retail destination as a place of activity and leisure will result in a more compelling landscaped environment around the retail areas.

We took cues from the integration of architecture and landscape of the formal Chinese garden which is based on groups of pavilions and courtyards within and enclosing naturalistic landscaping. To create a similar type of environment within a retail environment we proposed consolidating back of house infrastructure and operating the site in a similar manner to an online distribution hub with the retail units holding a limited stock supply.

The increased attention to landscaping and environmental design leads to locating vehicle parking at the edge of the site, with a reduced provision for individual cars and more facilities for autonomous vehicles operated as a taxi or bus service. We envisage
a process whereby autonomous vehicles can be automatically loaded with purchases from the storage facility allowing customers greater freedom to enjoy activities for longer.

At Bromley-by-Bow a number of landowners had been requested to produce a comprehensive masterplan for redevelopment of their combined ownerships as a new district centre.

The new district centre is intended to provide new retail/work units, a primary school, community facilities, a park and new road infrastructure in addition to residential development, as required by the local plan.

An indicative masterplan was produced which balanced the development objectives against the amount of residential development required for viability.

The indicative masterplan produced satisfied the LLDC that a comprehensive redevelopment could be undertaken by the individual landowners in a phased manner without compromising development objectives.